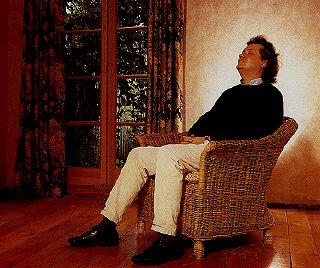 “I am a much easier person to live with”

“I believe in Transcendental Meditation. I have always told the truth when asked, and when I believe something can help I feel obliged to say so…My daughter Gaby had tried Transcendental Meditation and persuaded me to try it too, even before my first stroke. The two-day course cost a bomb but the logic of it appealed to me. After all, what is the point of relaxing the body if the brain is not rested as well.”

The effect, he says, has been dramatic: “I am a much easier person to live with. To coin a phrase, I don’t make a drama out of a crisis. If I gave it up now, my wife would leave me.”

“I also feel physically better once I meditate”

“Before I started meditating…I always felt there should be some way of freeing up the mind…to be able to see clearly what matters and what doesn’t. Now I find it easier to accept the things I can’t change, yet am more able to change the things I can. I often find the solution to a problem after meditating or gain a different perspective on it.

I also feel that TM has made me calmer. I have a clearer focus and I’m achieving more, particularly at work. Also, in situations where I’ve had to deal with difficult people, I now find it easier not to get personally upset.

“I also feel physically better once I meditate. My breathing settles down, the back of my neck frees up, and tension is released from my shoulders and stomach. It also re-energises me at the end of a day’s work so it’s easier to go out in the evening.”

“It does stretch non-meditators’ imagination”

“It does stretch non-meditators’ imagination, but I believe that our meditation…is good for business. Our success depends on being creative, and Transcendental Meditation has made a real contribution to giving us an edge.”

“The practice gives me a bit more pep”

“I make 50-60 telephone calls around the globe every day and I work long days. The practice improves my focus and gives me a bit more pep. Three other people practise TM in my small company and it helps us work together under stress. I’ve not had a sick day in two years, and that, at least, has saved us money.”

“My concentration improved, I have amazing physical energy and am capable of long hours of physical work without fatigue. After a fortnight [after learning TM] I realized that I had stopped biting my nails, a lifelong habit. I have a sense of organization which I have lacked all my life. I feel more patient and tolerant.”

TM In The Press